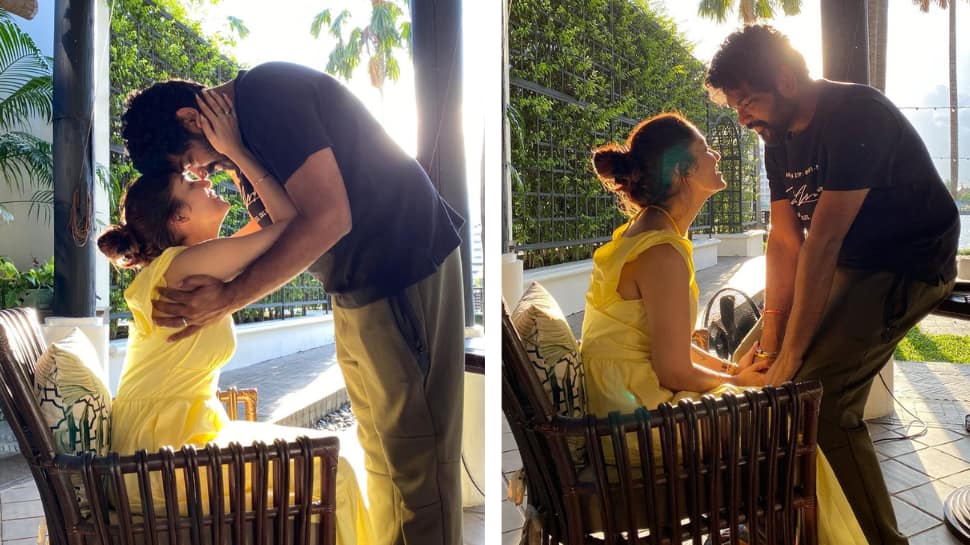 New Delhi: Newlyweds Vignesh Shivan and Nayanthara are currently on a dreamy honeymoon in Thailand. Taking to his Instagram, Vignesh shared some romantic pictures of the couple and netizens can`t keep their eyes off it. In the pictures, both Nayanthara and Vignesh look cosy and relaxed. Nayanthara is seen wearing a yellow summer dress while Vignesh kept it casual in a basic t-shirt and pants.

In the first picture, it looks like the couple is finding it difficult to keep their eyes off each other.In another one, they are caught in a romantic moment. He also uploaded a couple of sun-kissed pictures that show Nayanthara posing alone.

He captioned the post, “In #Thailand with my Thaaram” and accompanied it with a lot of emoticons. A fan commented, “Pic and the caption (heart emoji)”.

Another one wrote, “Awwww you both!!!! Adors (heart emoji)”.


Earlier, Vignesh shared an unseen picture from the wedding where he thanked the organisers and their team for making the couple’s big day a great one. He captioned the photo, “The last-minute changes, the final minute twists and turns. U guys made sure everything is perfect for us for the most special day of our lives”.


Nayanthara and Vignesh tied the knot in an intimate ceremony at a private resort in Mahabalipuram. The ceremony was attended by close friends and family. Only a few celebrities were invited. Rajnikanth, Shah Rukh Khan, and Director Atlee were some of the few celebrities spotted at the wedding.

On the work front, Nayanthara is reportedly set to make her Bollywood debut opposite Shah Rukh Khan in the upcoming film `Jawan`. The film will be directed by Atlee. Produced by Gauri Khan, `Jawan` will be Shah Rukh Khan`s first pan-India film, which will be released on June 2, 2023, across five languages – Hindi, Tamil, Telugu, Malayalam and Kannada.