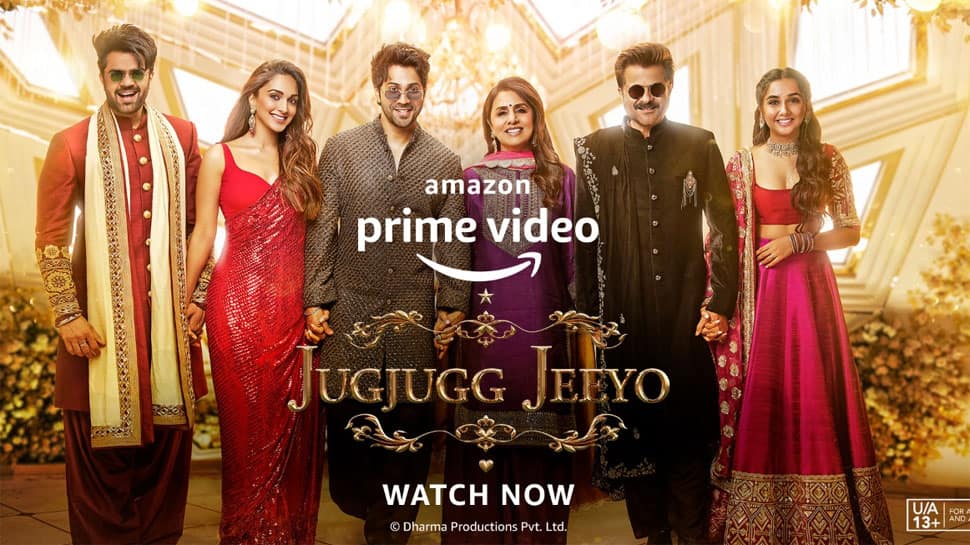 New Delhi: JugJugg Jeeyo is a part of Prime Video’s Prime Day 2022 line-up that also includes several other original series and blockbuster movies across multiple languages, in addition to attractive discounts from partners through Prime Video Channels. Prime Day 2022 in India is on July 23 & 24

Prime members in India and across 240 countries, and territories, can watch the film starting today, July 22. Directed by Raj Mehta and jointly produced by Dharma Productions and Viacom18 Studios, the comedy-drama features veterans Anil Kapoor and Neetu Kapoor, along with superstars Varun Dhawan, Kiara Advani in leading roles. While it marks YouTuber Prajakta Koli’s film debut, actor-host Manish Paul plays a pivotal role in the film.

JugJugg Jeeyo is a part of Prime Video’s Prime Day 2022 line-up. The line-up also includes Amazon Original series and blockbuster movies across languages that are now already available on the service. Additionally, Prime members can avail attractive discounts when purchasing most add-on subscriptions from amongst the 13 popular video streaming services available on Prime Video Channels. Prime Day 2022 in India is on July 23 & 24.

“JugJugg Jeeyo has been a fantastic experience, all thanks to the amazing cast, team and the love the film has received from the audience,” continues Varun Dhawan, “Playing Kuldeep Saini was challenging but fruitful. It is a character that I’ve never played before, and thus it holds a special place in my heart. The film witnessed a very successful run at the box office and now I’m delighted that starting today, viewers can enjoy JugJugg Jeeyo from the comfort of their homes on Amazon Prime Video. It is a story that needs to be seen by all and I am thrilled that the film will reach a global audience across 240 countries and territories.”

“It’s great to see this out-and-out family entertainer win so many hearts! The film is a testament that good stories will always resonate with audiences,” said Anil Kapoor. “It has been a delightful journey and it’s a pleasure to bring this film to a wider audience worldwide through Amazon Prime Video.”

“From day 1 we knew that we were creating something special with JugJugg Jeeyo. However, little did we know how successful the film will go on to be. Every single member of the cast and crew have given their heart and soul and I am pleased to know that our labour of love will reach an even wider audience with Amazon Prime Video,” expressed Neetu Kapoor.

“My experience of working on JugJugg Jeeyo has been extremely memorable, we formed a family while shooting the film and I’m excited to share the bond of my onscreen family with your family” shared Kiara Advani. “I am extremely elated knowing that Amazon Prime Video is bringing my JugJugg Jeeyo family closer to the audiences. Having given us so much love in theaters, I can’t wait to see the audience enjoy the film and share their love with us once again.”

Set in the heart of Patiala, JugJugg Jeeyo is a tale of two couples representing two different generations, entangled in post marriage issues. The story delves deep into the topics of love, family values, unresolved yearnings, and unexpected reconciliations. With Varun Dhawan playing the dotting on-screen son of Anil and Neetu Kapoor, along with Kiara Advani shining as the modern-day working woman, full of life and cheer, JugJugg Jeeyo is a perfect blend of drama, emotions and humour. Be a part of this fascinating family drama on July 22. Save the date!