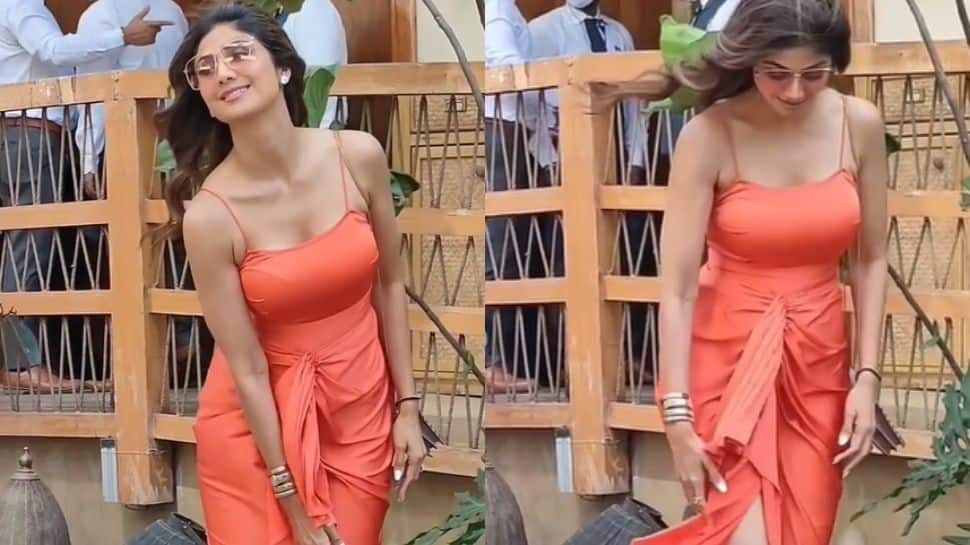 New Delhi: Actress Shilpa Shetty suffered an oops moment on Wednesday (Feb 2) when she had stepped out of her home in a stunning orange dress. The ‘Hungama 2’ actress looked breathtaking as she walked the streets in an orange slit dress.

However, due to the wind, Shilpa was forced to hold on to her dress and not let it get swayed by the breeze. In a video shared by ace photographer Viral Bhayani, Shilpa Shetty was seen posing for the paps and then preventing her dress from flowing with the wind by holding it down.

A few netizens even trolled her for her ‘oops moment’ with her dress. Others were supportive of her and praised her for her eternal beauty.

Take a look at the video:

Shilpa Shetty wore the orange midi dress for her sister Shamita Shetty’s birthday which the Shetty sisters had celebrated on February 2.

Shamita was also joined by her mother Sunanda Shetty and her brother-in-law Raj Kundra for the celebration at Bastian restaurant.

Shilpa and Shamita even posed for paparazzi outside the venue. Shamita Shetty looked gorgeous as ever as she stepped out in a ribbed red bodycon dress that came with a plunging neckline. She kept her beautiful hair open and rounded off her look with golden ballerinas and a handbag.

She finished fourth in the reality TV show Bigg Boss 15 as Tejasswi Prakash beat her to the winner’s position. Shamita, however, was rooting Pratik Sehajpal to win the BB 15 trophy.