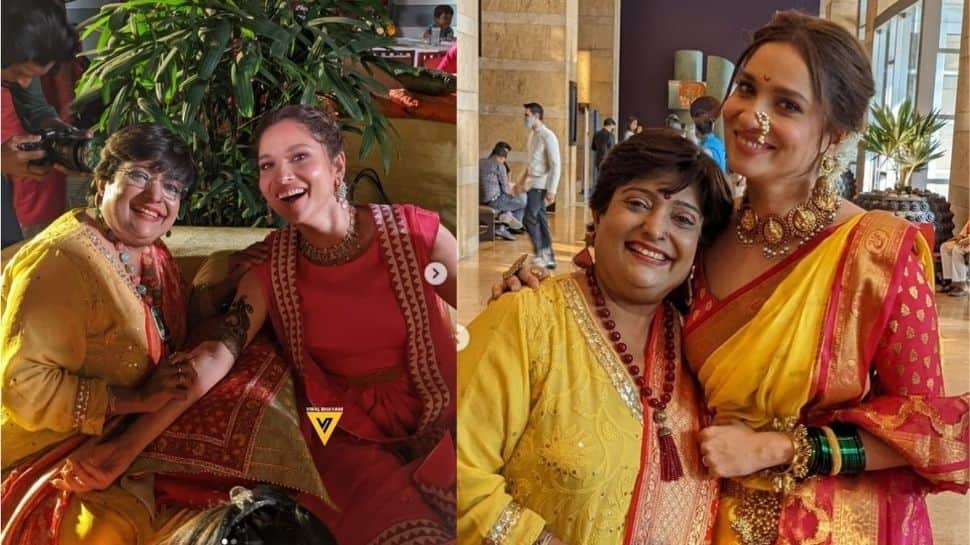 New Delhi: Bride-to-be Ankita Lokhande is all set to marry her longtime boyfriend Vicky Jain before the year ends and her pre-wedding festivities have already begun.

For the occasion, dressed in pink outfit, Ankita looked stunning and that radiant bride smile was on place. While her groom-to-be Vicky can be seen dancing to the tunes of the dhol with his friends.

Celebrity mehendi artist Veena Nagda shared few pictures along with Ankita on her Instagram account. She was the one who also applied mehendi on Katrina Kaif’s hands during her wedding with Vicky Kaushal.

Ankita was seen applying heavy mehendi designs on both of her hands and later Vicky was also seen enjoying the mehendi session.

For the unversed, Ankita sprained her leg and was rushed to the hospital on Tuesday night. The actress has shared pictures on Instagram stories wherein her injured leg was seen.
On Saturday, Ankita shared her pre-wedding video with beau Vicky and captioned it as, “The Sands of Time !
Filmed by – @theweddingstory_official
Styled by – @castelino_priyanka
#preweddingshoot….”

For the unversed, Ankita and Vicky have been dating for more than 3 years now and never miss a chance to woo their fans with their adorable posts.

Vicky Jain has always stood like a rock through Ankita’s thick and thin.

Ankita shot to fame through her popular TV show ‘Pavitra Rishta’ which also starred her ex-boyfriend and late actor Sushant Singh Rajput. She has also worked in shows including- ‘Ek Thhi Naayka’ and ‘Shakti – Astitva Ke Ehsaas Ki’ to name a few.

She made her Bollywood debut with ‘Manikarnika: The Queen of Jhansi’ and was later seen in a supporting role in ‘Baaghi 3’.