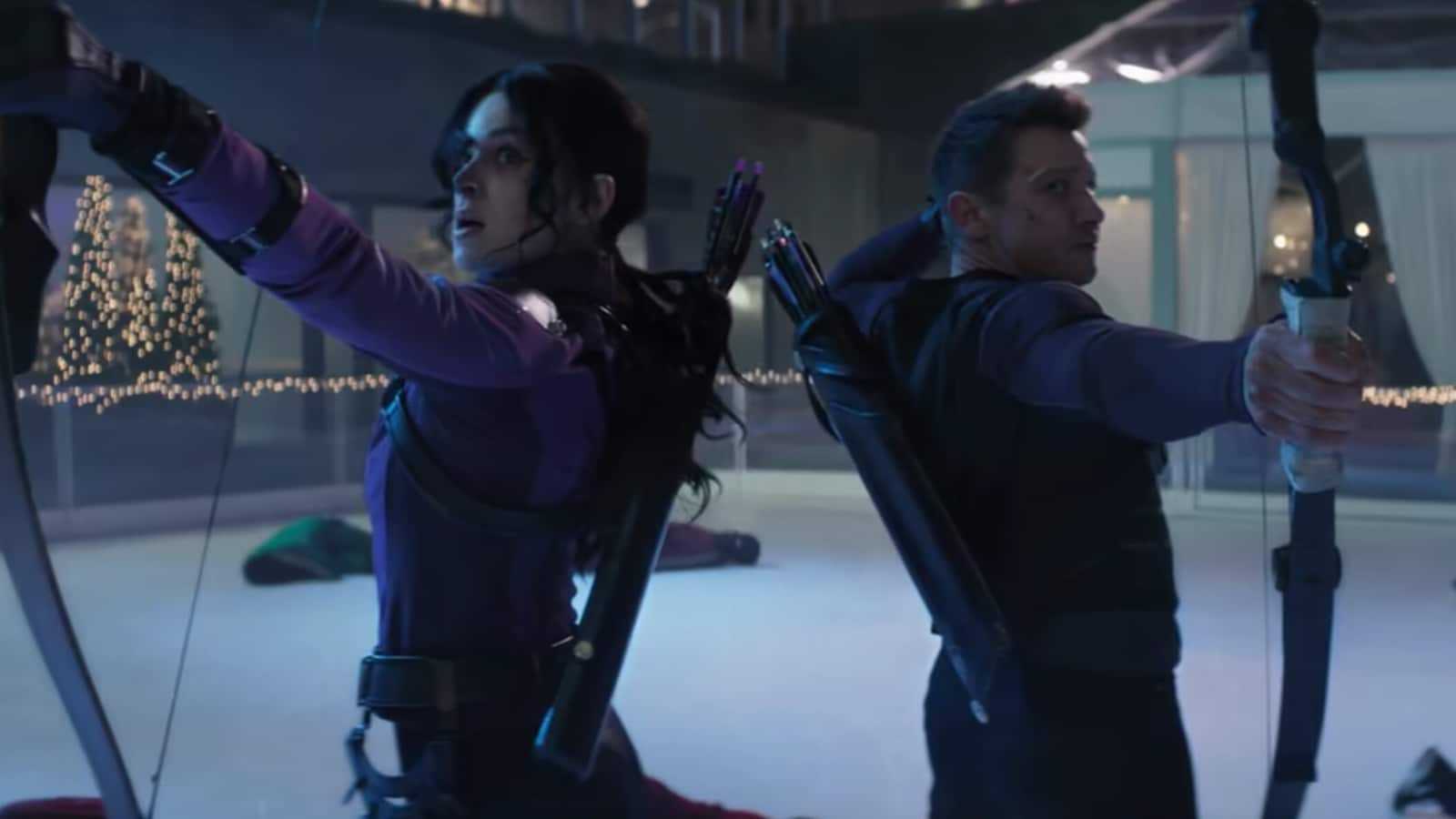 A young girl sees her entire world change in an instant when creatures from another world appear and start laying waste to her New York-penthouse, and city. Crippled by fear, as one of the alien creatures charges towards her, her life is saved by an arrow. On a rooftop corner in the distance, she sees a hero with a bow and arrow doing his best to fight back and protect the city and its people. It’s a moment that comes to define her. Her need to protect her loved ones become her identity, with that image of the heroic archer giving her an ideal to aspire to.

It’s a very promising idea and a great foundation for a story. If only how it’s told wasn’t so on the nose and watered down.

The young girl in question is Kate Bishop, who, on that fateful day, joined the ranks of heroes and villains (Spiderman Homecoming’s Vulture) whose origin stories stem from the fallout of the battle of New York–the incident that first formed the Avengers. In the very next scene, after witnessing her home and city battered and in pieces, we see young Kate at her father’s funeral telling her mother she needs a bow and arrow. It’s an entirely unnecessary exchange that’s inserted to ensure that what should have been an underlined subtext, slaps us square in the face. Maybe we should just be grateful that young Katie didn’t see The Hulk on that rooftop corner, or else she’d have asked her mother for anabolic steroids and green face paint.

It’s something we see repeatedly through the first two episodes (with the remainder releasing weekly) of the latest MCU spinoff series Hawkeye, envisioned as a playful, buddy cop Christmas comedy. It’s not enough for characters to convey how they feel, they have to speak it and lay everything on the surface, with little to offer beneath.

Cut to modern-day years later and the now 22-year-old Kate (an infinitely watchable Hailee Steinfeld) is a trained martial artist, champion fencer, and, of course, archer, ready to find adventures to fall into and bad guys to beat. And find them, she does. Elsewhere in New York, the now-retired Clint Barton (Jeremy Runner) is spending time with his kids. It’s Christmas, and he’s doing his best to make up for lost time– the five years, during which his family turned to dust, along with half the world, turning him into the murderous vigilante known as Ronin.

Included in the family time is watching an Avengers-themed broadway musical. Easily the best sequence of the otherwise unremarkable pilot episode, it’s everything you’d want from a campy, hilarious Avengers musical theatre show. Though I fail to understand why Clint would ever agree to watch it in the first place. When Natasha Romanoff’s (Black Widow) death plays out on stage, he steps out onto the road to take a moment, as he relives the loss of his best friend who gave her life to save his. And yet, once again, the series refuses to let him have his quiet moment. Instead, a character (in this case his young daughter) must come out and tell us what he’s feeling and why he’s feeling it.

With our two archer heroes established–the retired hero and the rookie he inspired, all that’s left is to concoct a fun adventure to force them together. I just wish doing so didn’t require so many contrivances. I’m fine, for example, with Hawkeye-obsessed-hero-in-training Kate just finding a villainous conspiracy in her backyard. Where I draw the line, however, is at how that conspiracy happens to be directly linked to Clint’s past as Ronin, beginning to catch up with him.

The big question remains of how much this latest MCU series will focus on finally giving Hawkeye his due as against serving as a Kate Bishop origin story. It’s an issue I had with this year’s Black Widow, which felt more preoccupied with passing on the mantle to Florence Pugh’s Yelena, than giving Natasha Romonoff the long-overdue send-off she deserved.

Based on these two episodes, Hawkeye works best as a fun, plucky superhero teen flick for kids above all else, and it’s made clear that the stretches of genuinely fine storytelling and character building through the Infinity Saga shouldn’t come to impact our expectations here. There’s even a cute dog sidekick on offer.

That said, once you make your peace with what it isn’t, there’s much fun to be had, particularly in the significantly more promising second episode where the series leans further into its buddy cop action comedy elements. Here we see more of Hawkeye as the reluctant but wise father figure he’s always been.

This stronger sophomore episode also attempts to reflect on his legacy. In one wonderfully meta exchange between the two archers, Kate explains to Clint why he isn’t as memorable as the other Avengers’ “Your problem is branding”, she says. It’s in this scene and the nerdy roleplaying gathering Clint attends later in the episode that makes it clear that Hawkeye is, at its core, about a retired superhero still reeling from loss, pain, and revenge, who’s thrown into a world of fandom he helped inspire. It’s something I hope we see a great deal more of in the coming weeks.