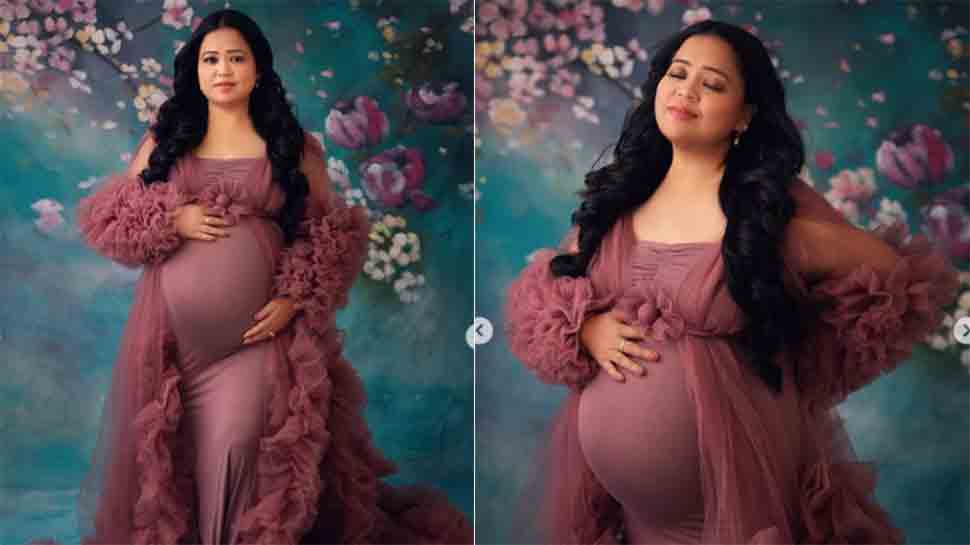 NEW DELHI: Comedians-TV hosts Bharti Singh and Haarsh Limbachiyaa are all set to welcome their first child in the first week of April. On Saturday, a day after Holi, Bharti dropped a series of pictures from her maternity photoshoot on social media. The comedienne, who is heavily pregnant, captioned the post writing, “Aane wale baby ki mummy.”

An eight-month pregnant Bharti, who donned a pink-magenta gown, was seen cradling her baby bump in the pictures. She wore subtle makeup and carried loose curls.

Her friends from the industry took to the comments section and showered the ‘mommy-to-be’ with love and hugs. Actor Nakuul Mehta, Adaa Khan, Kishwer Merchantt and Pooja Gor, were among others reacted to the photos.

Take a look at her pictures below:

Only recently, Bharti had revealed that she didn’t know she was pregnant for about two months. In an interview with an entertainment portal, she said that she was continuing with her daily activities as she didn’t know she was pregnant. Later, she decided to test herself and that is when she realised she was expecting her first child with her husband Haarsh Limbachiyaa.

Talking about the same, she told Pinkvilla, “When I got pregnant, for two and a half months, I didn’t even realise it. Mote logon ka pata nahi chalta. I am eating, shooting, running around and dancing on Dance Deewane. Then I thought let’s just check it once. When I did, I put the test down and came outside. When I went back to it and saw the two lines, I told Haarsh about it. So that was a surprise for us. We did not plan that this is the right time to have a baby.”

For the unversed, Bharti Singh had announced her pregnancy in a video on their YouTube channel, LOL Life Of Limbachiyaa’s.

After the news broke, fans were over the moon and congratulated them. Bharti has since shared a few pictures of her baby bump and even asked fans to guess the gender of the baby in an Instagram post.
Bharti Singh has been working during her pregnancy. After hosting ‘Dance Deewane 3’, Bharti is currently hosting ‘Hunarbaaz’ with her husband Haarsh. The show is judged by Mithun Chakraborty, Karan Johar and Parineeti Chopra.

Apart from that, Bharti recently launched the third season of her and Haarsh’s show, ‘Khatra Khatra Khatra’.