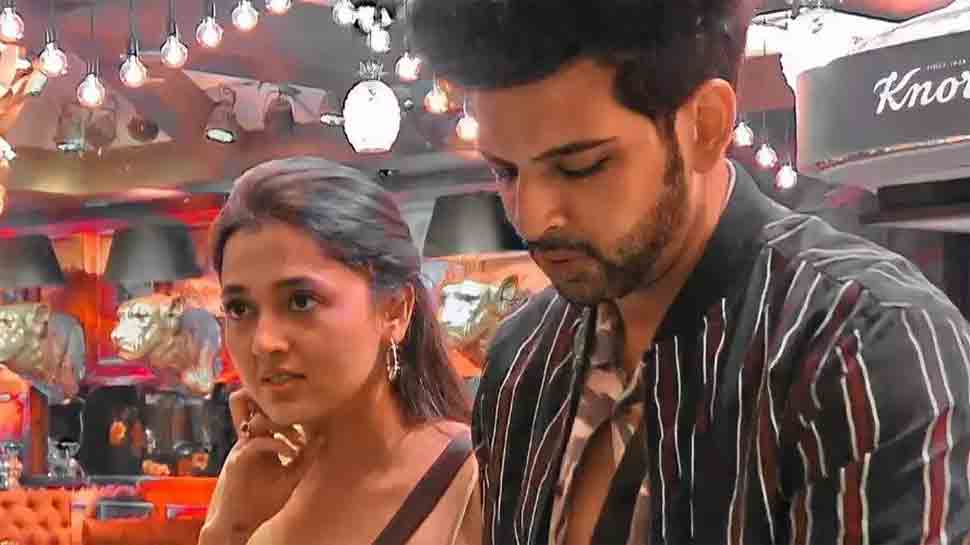 Rakhi Sawant asks Abhijit Bichukale to play aggressively and do something to save himself in the task. If that even requires him to do some ‘convincing and buttering’. Bichukale says he won’t do anything like this.

The Ticket To Finale task continues. Devoleena clears it that she will be supporting Tejasswi Prakash and Abhijit Bichukale. Nishant tells Shamita that they need to prioritize people. Shamita tells Pratik that she wants Bichukale out of the race and will support Karan.

Devoleena, Umar and Pratik fight it out. Pratik takes the ball and throws it outside the house. Bigg Boss tells housemates to play the game maturely and use their rights to help the contestant of their choice. Bigg Boss asks housemates if they deliberately tried to cancel the task with what they did.

Teja and Karan have an argument. She says she will fight for someone who supports her with a guarantee. Devo and Rakhi decide to support Tejasswi.

Pratik and Rashami also fight it out. She calls Rakhi ‘nalli’. Kundrra fights with Pratik.

Devoleena again asks Karan if he has a problem is she wins. Karan leaves the conversation. Pratik and Nishant fight and call each other ‘fattu’ and ‘dalbadlu’.

Devoleena ends Rashami’s lifelines from the game. She says Rashami only provokes and manipulates people.

Tejasswi and Karan again have an argument. Karan says Rakhi, Devoleena and Pratik have been cheating. Karan says he is a proof that Rakhi was biased in the game.

Rakhi Sawant says I feel Teja deserves to go to the finale. Karan overhears this. He tells everyone that Rakhi has planned to make Teja every round. Teja says I have not told anyone to make me win. Kundrra says it is about convenience.

At night, Teja asks Karan if he really had this coming between us. She says I am the only one trying to sort our issues. She says you never come to me. Teja says you are a different person in tasks. She says you are not even interested in a conversation. She leaves angrily.

Karan calls Nishant saying he needs him. Umar too joins in and consoles him. Nishant supports Tejasswi saying that she is playing for herself and it is not wrong. Later, Teja tells Karan that she has only one person with her. She says I did not ask anyone. Teja says I want to win fairly. Karan says I have no issues with you winning.

Kundrra says you are being stubborn to Teja. He says it is never about him and her. Teja says I am fighting for myself. He leaves the conversation.

Pratik says Teja will understand how it feels now. Rakhi says her boyfriend is her biggest enemy.

Rashami says Teja is going wrong since two weeks. Rashami says you need to cross question him. Rashami says tell her to shut up during the tasks. Tejasswi keeps on crying. Devo says your beau is your loser. Devo says I find Teja a good girl and I will save her.

Pratik tells Devo to avoid Bichukale. He tells her to be careful.

Umar have a chat with Umar and he says I always gave you priority. She tells Umar that KK and he have always isolated her after every task. She says this is a pattern.

Umar says I am not supporting Rashami in this task. Nishant and Umar are with Teja. Umar says suddenly you are taking my name before Nishant. They have an argument. Rakhi says Umar is igniting trouble.

Pratik says Karan has no emotions. Karan is not eating food. Tejasswi tries to convince him.

Rakhi says she has no favourites. She says I do not mind Teja as she is better than Bichukale. Shamita says Bichukale has done nothing since three weeks. Karan Kundrra has not eaten anything and Teja is concerned.