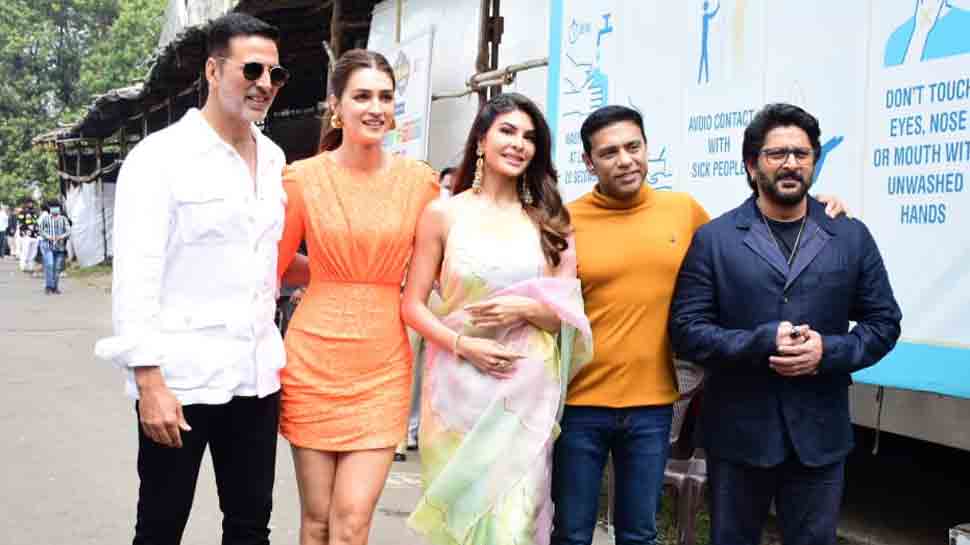 NEW DELHI: Bollywood superstar Akshay Kumar, who was been busy promoting his upcoming film ‘Bachchhan Paandey’, was on Wednesday spotted on the sets of ‘The Kapil Sharma Show’ for a promotional event.

The entire cast of ‘Bachchhan Paandey’ was papped outside the sets of The Kapil Sharma Show, inclding ‘Khiladi’ Akshay Kumar, Jacqueline Fernandez, Kriti Sanon among others.

Akshay Kumar looked dashing as ever in a cool black and white outfit. The actor also carried a cool pair of shades and happily posed for the shutterbugs.

Akshay Kumar, who will be seen as a ruthless gangster in ‘Bachchhan Paandey’, was spotted in his salt and pepper look. He plays the titular character in the action-comedy film. The film is directed by Farhad Samji and produced by Sajid Nadiadwala.

Actress Kriti Sanon, who is once again teamed up with Akshay after their last blockbuster ‘Housefull 4’, was also papped outside the ‘The Kapil Sharma Show’. She looked gorgeous as ever in an orange bodycon dress and had her. The actress was spotted with an injury on her left toe.

Jacqueline Fernandez looked radiant as ever in a multi-coloured pastel saree which she teamed with a halter-neck blouse. She and Akshay have previously worked together in ‘Dishoom’, ‘Housefull’, Brothers’, Housefull 2, ‘Housefull 3’. The two will also be seen in ‘Ram Setu’.

Jacqueline’s upcoming projects include ‘Ram Setu’, ‘Kick 2’, ‘Cirkus’, and ‘Attack’ along with a Hollywood project and a few other unannounced projects.