In a pickle? Play ball 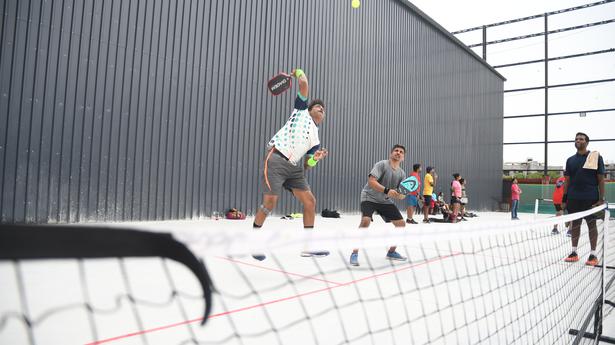 Pick up a paddle and head to a nearby court… to play pickleball. Combining the elements of three racquet sports, this game new sport is finding many takers in the city

Pick up a paddle and head to a nearby court… to play pickleball. Combining the elements of three racquet sports, this game is finding many takers in the city

Even as he skilfully chops the ball on a windy Saturday morning at the recently-held South India Pickleball Premier League at Hotfut SPR Sports in Perambur, Mohit answers questions from curious onlookers. He was introduced to the sport in 2019 through a family friend visiting from the US, where it’s a fast-growing sport, and has been playing it since.

For the uninitiated, pickleball combines elements of tennis, table tennis and badminton. Played both indoors and outdoors with a paddle and a ball, the sport can be picked up within a matter of hours and is an effective workout. Though it is a relatively-new sport in India, it has gained a lot of traction recently, especially in India’s post-lockdown phase: in 2020 the number of players in Tamil Nadu quadrupled in less than a year.

“It is also ideal for networking especially if you’re new to a city. We have a community that always opens its doors to new players,” says 36-year-old Mohit, general secretary of the Tamil Nadu Pickleball Association, which organised the League drawing more than 70 players, with aspirants coming in from Bengaluru, Kanchipuram and Shivamogga.

You do not need to have played any sport before to try your hand at pickleball, but previous trysts with racquet sports do help. Sunnidhi Jain, a student of Class XII in Chinmaya Vidyalaya, can vouch for that. Previously a professional badminton player who represented the State, Sunnidhi shifted loyalties when her cousin introduced her to pickleball a year ago. Since then, she has been at it — practising daily with peers at DAV Gopalapuram and training over the weekends.

Sunnidhi is currently among Tamil Nadu’s leading players in her category, having bagged gold and silver medals in various categories in the recent National Women’s tournament held in Bengaluru. “Pickleball is not as intense or physically tiring as badminton. My sporting background helped me pick it up fast, as the court sizes are the same in both sports,” says Sunnidhi, adding that she hopes to soon participate in international tournaments in Indonesia and the US.

While Sunnidhi is approaching the sport competitively, there are many amateurs who play the sport with their families for fun as well. “We see a lot of fathers and daughters playing, as well as players from all age groups,” beams Rajath Kankar MR, general secretary of the Indian Pickeball Association, which has 16 Indian states under its wing and hopes to increase this to 30 by the end of this year.

R Shyam Sundar of Shareplay, a mobile application and city-based startup that is working towards creating neighbourhood sports centres, says he first heard the word ‘pickleball’ a year ago. “Now, I hear it so often,” he says, “A lot of players book centers through us to play pickleball; an hour typically costs them ₹350-600 for a court.” He adds that typically, tennis, basketball and badminton courts are booked for pickleball.

The fact that the game is spreading rapidly across the country pleases Mumbai-based Sunil Valavalkar. Sunil, a company secretary, is believed to have introduced the sport in India, after spotting families playing it during his visits to Canada in 1999 and later 2006. “It was a revelation playing it and because I had a tennis background, I felt a connect with the sport,” he recalls.

Sunil returned to India armed with a few paddles and balls, determined to introduce it to his family and friends. He soon earned the sobriquet Pickleball Uncle in his neighbourhood, due to his incessant demos in the neighbourhood. “It has picked up a lot since then,” says Sunil, who went on to establish the All India Pickeball Association (AIPA) in 2008, “During the recent lockdown years, we have seen a tremendous interest in the sport. A basic serve in tennis takes six months to perfect. With pickleball, you can learn the entire game in a couple of hours.”

Pickeball is best suited for Indian conditions considering the country’s demographic and space constraints, stresses Sunil. “It is an ideal cardio workout for people wanting to stay fit. Going by the response to recent tournaments, there are about 6,000-7,000 active players in India at the moment,” he adds, acknowledging the support of Arvind Prabhoo, chairman of AIPA, in promoting the sport.

Yogesh Ramchandani, a 32-year-old Chennaiite in the construction business, is one among them. He had never held a racquet before, but currently, his weekly routine includes a few hours of pickleball with friends. “Even if you haven’t played any sport for a while, you can pick up the paddle and play,” he says, adding “Pickleball, after all, is all about having fun.”

Pickleball incorporates components of tennis, table tennis, and badminton into one. The standard court size is the same as a badminton court.

The game is played with a paddle that is roughly between the size of a badminton racquet and a table tennis bat. The ball is about the size of a tennis ball but made of plastic and with holes, to help counter windy conditions. The zone near the net on both sides is called the kitchen, where you cannot step in to take the ball on a full toss.

It’s both an indoor and outdoor sport; for the former, most badminton courts are open to hosting the space for pickleball as well. Temporary nets can be fixed and play can commence.

Pickleball dates back to 1965 and was born in Bainbridge Island, USA. It was invented by Joel Pritchard, Bill Bell, and Barney McCallum to entertain their children who were bored of routine summertime activities. It is named after pickle boat – a rowing crew that is thrown together from available rowers – since the sport was a mix of rules thrown together