Cycle With Kochi: Homemakers learn to ride a cycle and live a dream 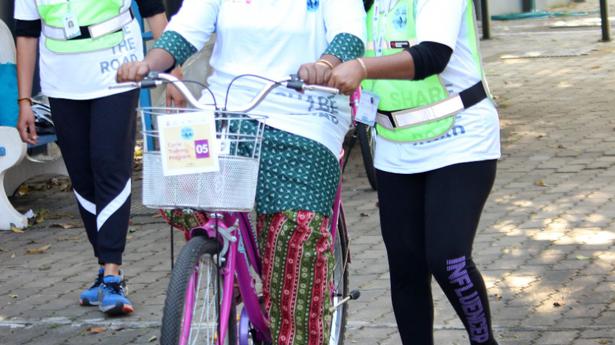 In a bid to promote green commuting, Cochin Corporation’s ‘Cycle With Kochi’ project is training Kudumbashree women to cycle

In a bid to promote green commuting, Cochin Corporation’s ‘Cycle With Kochi’ project is training Kudumbashree women to cycle

Zeenath Shihab learned to cycle when she turned 44. A mother of two 20-year-olds, she overcame family reservations and enrolled in Cochin Corporation’s ‘Cycle With Kochi’ programme.  “I feel thrilled at realising my childhood dreams. Today my family is proud of me and my parents are pleased,” says Zeenath. She is from the first batch of 160 women who are being trained to bicycle under the project that strives to empower economically weaker women and high school girls in Kochi.

Aimed at moulding a generation of cyclists that will change the environment and eco system of the city in the coming years, the programme is already changing lives.

Like Zeenath, another middle-aged woman, who prefers to not disclose her identity, had to face ridicule from the men of her family who betted against her ability to learn the skill. They vowed to tonsure their heads if she was successful. Beating the odds, she is now a confident cyclist.

After learning to cycle, Lincy KS, a homemaker and mother of two grown up children, has bought herself a cycle. “I now have the freedom to go anywhere I like and not depend on anyone,” says Lincy, who was encouraged by her family. It was the family’s economic condition that prevented her parents to buy a bicycle when she was a child. Lincy found the training difficult, especially the initial “balancing.”

In 2017 The Integrated Sustainable Urban Transport Systems for Smart Cities (SMART-SUT) project was launched in three cities- Kochi, Coimbatore and Bhuvaneshwar. In February 2021, Kochi mayor, Anil Kumar, declared 2021 as the ‘Year of Green Urban Mobility’. Later in October, 2021, ‘Cycle With Kochi’ programme was launched to promote cycling as a preferred mode of commuting across all the 74 wards of Kochi. A collaboration between Kochi Municipal Corporation (KMC), CSML(Cochin Smart City Mission Limited) and C- HED (Centre for Heritage, Environment and Development), the project is underway in eight grounds across the city, with a trainer allocated to each ground. GIZ, a German firm, is supporting the project by providing research and technology assistance.

Spokesperson of GIZ, discloses that while Kochi has everything going for it to have cycling as a green mobility option, what it lacks is on the ground riders. “When we found that there is a dearth of riders who use the bicycle for daily work, we came up with the idea of training Kudumbashree women workers to cycle.” The second batch of 112 women will begin training in six grounds from March 26.

One of the trainers, a 22-year-old B Com graduate, Anna Job, volunteered to teach Kudumbashree women to cycle, when she learned about the project. “Teaching older people to cycle is not the same as teaching a child, so we had a one-day training programme,” says Anna, adding that the two biggest barriers she found while teaching the older women were ‘fear’ and “age-related inhibition”. “Many faced ridicule from their families but many had their support too,” she says. One of the first things she was taught to do was continuously motivate them. The first day was learning to balance with one leg touching the ground.

“Some of the ladies told me that they were dissuaded in childhood from cycling,” says Anna and recalls Lincy’s perpetual fear of falling down and of Shiny blushing when her husband came to watch her cycle, after she learned to ride.

In 2019, BYCS, an Amsterdam-based social enterprise, chose Prakash T Gopinath as the cycle mayor of Thiruvananthapuram. Gopinath who is the coordinator of the project, says, “Kochi has many cycling groups but they cycle on weekends or for certain campaigns. They do not use the cycle as a mode to commute.”

Age is not a barrier

Women who learned cycling under the Cycle With Kochi programme at a Cycle Rally on March 13, 2022
| Photo Credit: GIZ

He set up one of the oldest cycling clubs in Thiruvananthapuram, Indus Cycling Embassy, in 2012 and SHEROES, a bicycling club in 2021 and has so far trained 168 women over a period of three years. He says, “Age is not a barrier when it comes to learning cycling. A 68-year-old nurse, Anna Kutty, learned it in three days while her 38-year-old assistant, Minnu George took two weeks.”

According to him cycles of different heights are provided at site. He insists that no relative of the trainee should be present on the ground while she learns. Pointing to cycling being a non-polluting mode of transport, Prakash shares data that in Kochi 250 vehicles are registered every day and a whopping 6,000 a month. “The air quality of the city in 2021 is what New Delhi’s was in 2011. It is only a matter of time for our air quality to worsen if we do not resort to green mobility.”

Lack of bus routes in many areas contribute to people turning cycle-friendly as there are many options to rent bicycles in the city now, Prakash points out.

For Anna, “teaching ‘aunties’ to ride a cycle” has been an experience of a lifetime. She sees her success in the success of the women who now put on their helmets and peddle away on the road safely, amid traffic.

In a unique exercise Prakash T Gopinath and his team have undertaken a survey of cycle repair shops in Kochi city to help cyclists reach out to the nearest one in case of a breakdown. Cycling shops, cyclists, cycle dealers, clubs in all 74 wards of the Corporation are being contacted for information. The team is using a GPS locator to zero in on all small repair shops in bylanes.